We spoke with Culture's first Fermentation Engineer, Sal Mireles, about how Culture and his role have evolved since he joined and about his interest in integrating machine learning with his work. 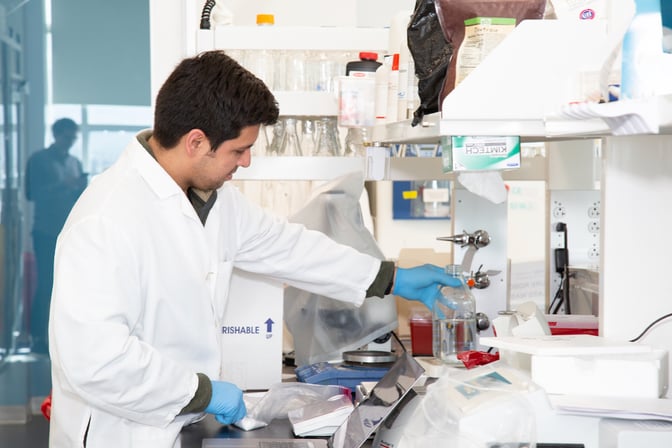 Max: What was your first exposure to fermentation?

Sal: I wasn’t exposed to fermentation until I got to graduate school studying Chemical Engineering, when I took a class on bioprocessing.  During lectures we went over the basics of fermentation and bioreactor design, and then eventually that was coupled with a lab class where we got hands-on exposure to running fermentations.

Max: What were your initial thoughts?

Sal: It was a really quick overview to get a broad understanding of bioprocessing in one course. We did transformations one week and then fermentation the next week and by the third week we were on to purification, so it was super fast. It was a lot of information to take in at the time.

Max: How did you go from that brief overview to working at Culture?

Sal: I had a friend in the bioprocessing class that had worked with Fre Tachea, Culture’s Director of Fermentation, in the past. He connected me with Fre because he knew that Culture was looking for a part time research associate. The timing was perfect for me because I had just transitioned to taking all night classes, and had time available during the week when they were looking for help.

Max: What were you initial thoughts when you joined Culture?

Sal: There was only one prototype reactor at the time, and it was housed in this frame that looked like Kinex- pieces. It was totally different than the 5L reactor I had worked with in school, but I was very intrigued by the opportunity to build something new from scratch.

Max: What did you work on initially?

Sal: The first question we had to address was whether the initial reactor worked. If some component wasn’t working we had to fix it, and if it worked somewhat we tried to make it better. We had to test every part on the fermentor to make sure they worked and the automated control systems were working.

We did a lot of experimenting with DO control and different types of feeding strategies using E. coli. One of the biggest challenges back then was figuring out the cooling system and maintaining the right temperature in the vessel. Along the way I slowly but surely gained a lot more experience with, and interest in, fermentation and bioprocessing.

Max: How did your role evolve from there?

Sal: Things changed as we started to scale out and build more bioreactors. After a few months we went from 1 to 3 and then to 6, making gradual iterations and improvements. Within a year we had 18 working bioreactors in the lab, and my role shifted from testing reactor components to scaling out our sampling and lab process methodologies to accommodate the demand on the 18 reactors.

After about six months I transitioned to full time, adjusting my class schedule accordingly. It would take me longer to graduate because I was taking fewer classes per semester, but I was really into the work.

Max: What changed for you that made you want to focus on fermentation work?

Sal: While in graduate school I was probing a bunch of different fields because I liked branching out and exploring new topics. When I started at Culture there were so many new and different things for me to learn. Working here has also been a great opportunity to explore different interests- what we do involves learning skills in hardware, software, and fermentation science.

Max: You are now the main point-of-contact at Culture for several of our clients. How did that come to be?

Sal: It was a gradual transition, which initially started as a specialization in fermentation. Over time as I worked with different customers on different types of fermentation processes with different organisms, I was able to take over a lot of the day-to-day with some clients. From that experience I started to work on different skills in serving customers, and now I can start off a new project with a new customer.

Max: What has been the greatest challenge during your work at Culture?

Sal: When we’re working with a new customer and have to figure out how to develop a representative scale-down model for their process.

Max: How so? Isn’t that a fairly straightforward process?

Sal: In theory yes, but you don’t actually know what the outcome of your scale-down model is going to be or if it is going to work at first. You might get lucky on your first try, but sometimes there are lingering questions that you need to resolve: is it simply a matter of scaling down aeration, or do you have to adjust agitation as well?  We need to make sure we understand every detail of the seed-train process to ensure we’re successfully matching it exactly. Making the scale-down model is such a critical step and the success of the project depends on it, so we always make sure to invest the time to get this right before moving onto running other experiments.

Max: What’s the best part about working at Culture?

Sal: The greatest reward is that there is something new every week. You work on one microbe and one type of process one week and then totally shift gears another week. It constantly exposes you to learning new things.

I’ve also really enjoyed learning from Fre. She’s a fermentation mastermind. She’s seen almost everything before and, if she hasn’t, she has so much experience that she knows what direction to take initially. It’s been so great having that mentoring and guidance.

Max: How has Culture changed since you joined?

Sal: Besides having a ton more reactors, we have a ton of new personalities. As our team grows and we bring on people from different backgrounds we introduce new ideas and new energy. It’s been really interesting to see that come together as we build such a cohesive team.

Max: How has it been juggling grad school classes with your work at Culture?

Sal: I’ve been able to integrate the two, which has been really cool. My final graduate project will be about machine learning and developing neural network sensors on our reactors.

Max: Aren’t you a Chemical Engineer?

Sal: Yeah, but a few years ago I randomly got into the field of machine learning. I started by watching a few videos online and nurturing the interest, but now I have an opportunity to apply that learning and make something useful out of it for Culture.

Sal: I’m hoping to build a program that can detect foaming in the reactors using the imagery from our camera on each reactor. At first it will be a binary classification of whether it is foaming or not foaming, but I’m hoping to have it be even more intricate than that eventually.

Max: How will you do that?

Sal: We have so much video footage since we live-stream each reactor while it is running, so I’ll initially start by doing some labeling of imagery to distinguish between foaming and not foaming. Then you use that labeled data to train a model to make predictions with new images.

There are some questions on scope in terms of whether training the model on one organism could be used on other organisms, or how different media compositions might affect the prediction accuracy.

Max: Is foam detected automatically in other types of reactors, or is this a new innovation?

Sal: There are conductance probes used in reactors that can detect foam. But we have clear vessels and video imagery at the front of each reactor, so that creates a new opportunity to use visual cues rather than a probe.

Max: When you’re not here, in class, or teaching yourself machine learning by watching videos online, what do you do for fun?

Sal: I like to hike, hang out with my friends, and to spend time with my dog, Chewy.

From Baking Bread to Making Biofuel