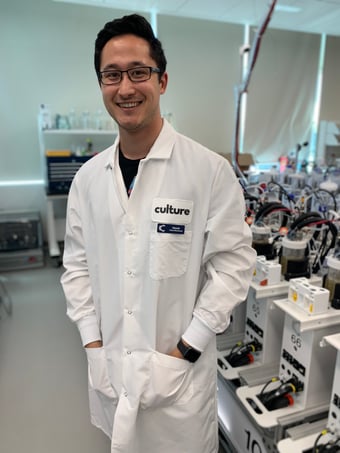 Max: When you were a kid, what did you want to be when you grew up?

Masaki: I wanted to be an astronaut, but I knew that I couldn’t be because I had asthma.

Max: Was being a fermentation engineer plan B?

Masaki: I used to hate biology actually. In high school I felt like it was all memorization of facts without any real application, and when I went to college I decided to avoid taking any biology classes. Chemistry, on the other hand, was my favorite subject in high school and I decided to major in chemical engineering when I started at UC Berkeley.

One day I was speaking with my faculty advisor and she asked me to work with her in her lab on biofuels. While I was initially hesitant, this project seemed like it had more real world applications than the biology I was trying to avoid, so I decided to give it a try. I worked on engineering transmembrane pumps to remove toxic fermentation byproducts out of cells. By removing the toxic elements from the cell, the microbes would stay alive longer and ultimately generate more of the desired product.

I loved being able to take this magical chemical of DNA and manipulate it in ways that had such practical effects. You saw the results of these tiny chemical manipulations play out in huge changes in how complex cellular machinery behaved. It was just so cool-- I was hooked.

Max: Loved it enough to give up your dream of being an astronaut?

Masaki: Not entirely-- my pivot to biological engineering eventually led me to work at NASA.

I joined the Berkeley team competing in the International Genetically Engineered Machine (iGEM) competition, working on engineering yeasts to fluoresce many colors so you could distinguish the different cells on a single microscope slide and ultimately study protein interactions. Through this involvement I was ultimately connected with NASA, who was collaborating with a different iGEM team, where I landed an internship during my senior year that led to a full time offer when I graduated. I was working on microbial fuel cells.

Max: What is a microbial fuel cell?

Masaki: They’re basically living batteries. Just like a regular battery where you have a cathode (+) and anode (-) and electrons transferring between them, some bacteria can transfer electrons to a wire. If you can get bacteria to photosynthetically capture sunlight and turn it into an electrical current, you can create a rechargeable battery in space.

This process of capturing sunlight and converting it into useable energy has other potentially beneficial applications in the small confines of a spaceship. You could use microbes to grow proteins for food or medicine. Or, if you need some chemical or material you could take a DNA sequence for it and put it into the bacteria to make it.

Max: So you were making space bioreactors!?

Masaki: Yes and no; the big challenge with all of this was making it happen in zero gravity. Life evolved to operate in earth’s gravity, so the challenge was getting the bacteria to thrive in space. I worked on putting electron transport systems into E. coli and testing them in microgravity.

Max: Why did you leave NASA?

Masaki: The 2014 government shutdown created funding instability on the project. I was really interested in bioreactors still, because they’re this amazing intersection of biology and chemistry with such real-world applications that really impact people. But, I had to look for more “down to earth” bioreactor applications. I joined a smaller pharmaceutical company for a short time, then started at Genentech.

Max: What did you do at Genentech?

Masaki: They initially hired me to do microbial fermentation, focusing on late stage process development work. At that point they had taken a drug through Phase I and II trials, and needed to figure out how to produce at scale optimally and then validate that process with the FDA.

After only a short while however, priority shifts within the company led to me moving to work on mammalian cell culture.

Max: Was there a learning curve in moving from fermentation to cell culture?

Masaki: Mammalian cell culture is more about risk assessment and mitigation than fermentation because the cells grow so much slower. You have to be more meticulous because the process takes so long; if you mess up in bacteria you can redo something in a day vs. 3-4 weeks in mammalian. Mammalian cells are also a lot less forgiving than microbes: something can happen in a cell bank that will impact the final product dramatically but you don’t know that for months until it is way too late.

Max: Were you working with much bigger bioreactor sizes at Genentech than previously?

Masaki: At NASA the largest was 500mL, at the first pharmaceutical company I was at we went up to 10L, but at Genentech we went to 1000L for microbial and 25000L for mammalian. Going from the smaller scale to that size isn’t really anything crazy, it’s mostly just process engineering. The biggest difference is that at that size you need whole teams of people working on a given run: multiple people to prep huge media reservoirs and connect much bigger pumps and valves, etc.

Scaling down from a larger tank, as opposed to scaling up from a smaller one, is more challenging. When there were issues in the production tanks that needed troubleshooting I would work to characterize the tanks to build scale-down models so we could run experiments at a small-scale to figure out what was happening. There’s no handbook on these big bioreactors- we had to look at gas and liquid mixing and oxygen transfer rates to ensure we could simulate that at a small scale. It’s very much chemical engineering- it was back to my roots.

Max: How did working on production scale bioreactors affect how you viewed small-scale R&D work?

Masaki: It really gives you more context when you’re doing process development work because you understand more clearly how it will impact the final production process. In pharmaceuticals it is always a race against the clock to lock down a process with the FDA and get the product to the patients. You can’t have a resource sink of testing every possible parameter when designing your process, so you have to do a balanced risk assessment of making informed assumptions vs. deciding what to actually test. It’s an educated guessing game.

Max: How did you end up leaving Genetech to join us at Culture Biosciences?

Masaki: I wasn’t looking for a job at the time, but Will reached out to me and I was intrigued by what they were doing. At Genentech I had been working on integrating data systems for applied data science as well as on sample tracking and data visualization, and I thought that these skills might be useful to bring to Culture.

What convinced me to join was the optimism and enthusiasm of the team when I came to visit. It was so cool to see how this small group was making such amazing progress so quickly by moving so agily. The combination of skills and backgrounds created this team where someone with a design background built a tool in a day to help a hardware problem and the software team hacked together a quick fix for an issue overnight. I was really impressed at how they were bringing their vision into reality.

Max: What’s next for you and for Culture?

Masaki: It is so cool how we’ve tripled our bioreactor capacity already since I joined, from 24 to 78. I’m excited not only to see us build even more reactors, but to test new capabilities with new industries like clean meats, renewable chemicals, and cell and gene therapies. We have a unique opportunity to be creative and customize our tools and services to meet the needs of the next generation of biotech customers.

I’m also getting a degree from Stanford in Biomedical Informatics, and am looking forward to incorporating those learnings into what we do here. I want to better understand how we can use the data we’re creating to make a digital lab with the data we’re generating in the wet lab.

Max: What do you do for fun when you’re not here in the lab or studying?

Masaki:  I love traveling, and have taken some quick trips to some awesome places. I went to Cambodia for a weekend once.

Masaki: Well, it was a long weekend. I left on a Thursday and got back on a Tuesday, which left me 2 days on the ground in Cambodia. On another trip I flew from here to NYC to Dubai, spent a night in Dubai, then flew to Bangkok and was there for one night before spending a night in Chiang Mai and flying back home.

From Baking Bread to Making Biofuels