Modern Meadow, one of Culture Biosciences’ first customers, is biomanufacturing the next generation of sustainable materials made from microbes. We spoke with Shashwat Vajpeyi, PhD, Fermentation Team Leader at Modern Meadow, about their work with Culture, specifically around scale-up. 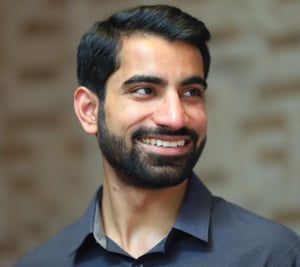 Shash: Until recently, we had only used Culture’s bioreactors as a final step in our strain development pipeline. After screening new strains first through a microtiter plate-based assay and then promoting the best to a shake flask study, we run the most promising strains at Culture to compare performance in a simulated production environment.

Culture: How does that work?

Shash: The work we have been doing with Culture is part of an effort to improve performance of strains that were already being used for production. We had established processes for these strains already that had been successfully run at scale, and we were looking to introduce new and improved strains without making major process changes. When we tested new strains in Culture’s bioreactors, we held the established process constant between runs so that we were just testing the relative performance of the strains compared to our production baseline.

A major part of this workstream was getting the scale-down model right, since we needed to ensure that Culture’s bioreactors were accurately simulating production scale conditions for the results to be useful. Through a successful collaboration between our teams involving experimentation and iteration, we developed a model where strain performance in Culture’s bioreactors is highly predictive of performance at scale. We can confidently send top-performing strains from Culture directly to production without needing to test further in-house.

Culture: What gave you that confidence in the scalability of Culture's reactors?

Shash: Through repeated testing with different strains and processes, the data from Culture has consistently shown similar performance as other scales. For all key bioprocess variables like cellular metabolism (measured by CER and carbon source concentration), biomass growth (measured by WCW, OD600, and biomass yield), and even product titer, we see very similar results between bioreactor runs done at Culture and our in-house bench-scale reactors, pilot-scale, and production scale reactors...

To read the rest of the interview and see the scale-up data, get our full report.

Analyze All Your High-Throughput Bioreactor Data in the Cloud

Check out our updated graphing and data visualization features on our website. Sign up for a demo!

Data from an ongoing collaboration with Cytovance Biologics to rapidly optimize and scale bioprocesses for therapeutic proteins.