Develop Your Bioprocess in a Representative Scale-down Model

Developing scalable bioreactor processes, from clone screening to media optimization, requires running hundreds of bioreactor experiments at a small-scale that are accurate simulations of large-scale bioreactor conditions. Our high-throughput, parallel bench-top bioreactors have a 250mL maximum working volume, yet can be used to simulate production-scale conditions.

One of our clients worked with us to generate scale-up data for production of an extra-cellular small molecule in E. coli.  After they developed their process in our 250mL reactors, they then moved to a 300L scale at a pilot plant. While the different geometries of the two reactors required different agitation and aeration rates, the similar dissolved oxygen (DO) percentage indicates that similar conditions were maintained in both reactors (as seen in Figures 1 and 2). As a result, the oxygen uptake rate (OUR) was very similar, demonstrating similar cellular metabolism between scales. Additionally, the final product titers were within 5% of one another. 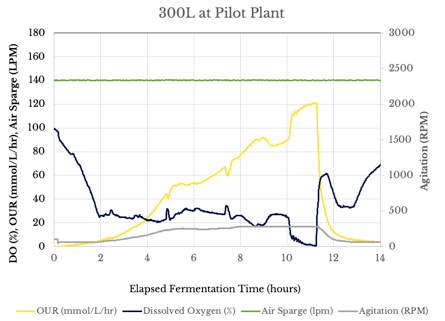 Figures 1 and 2. Comparing DO, OUR, aeration, and agitation for the same E. coli process run in Culture’s 250mL bioreactors and in a 300L bioreactor. The divergence in OUR  between the two reactors around 11 EFT may be explained by the drop in DO in the 300L reactor at that time. The process run at 250mL called for an increase in aeration around 11 EFT leading to a spike in OUR, while the 300L reactor did not increase aeration at this time while DO dropped to zero, perhaps limiting the OUR from hitting the spike seen in the 250mL reactor.

Announcing the launch of live data monitoring on our online analysis platform. Sign up for a demo.