The EVERY Company™ Approaches Scaling Up by Scaling Down

Ranjan Patnaik, PhD, the Chief Technology Officer at The EVERY Company, sat down with us to discuss his experience with scaling up fermentation processes. 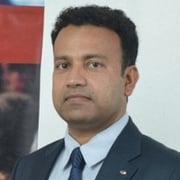 Culture: In your years of experience with industrial biomanufacturing, what would you say is the greatest lesson that you have learned?

Ranjan: I have been working in fermentation and synthetic biology for over 25 years, beginning as a chemical engineer. My doctorate research and subsequent initial work in the industry was on metabolic engineering of aromatic amino acid pathways in E. coli. These amino acids, such as tryptophan, tyrosine and phenylalanine, could be used for fermentative production of bio-indigo, aspartame, and a variety of other industrially important chemical building blocks. This experience got me so excited about what microbes had to offer, and I wanted to explore how we could use engineering principles to design them to produce new products at scale. Metabolic engineering is such a major component of that, which inspired me to shift my focus from traditional chemical engineering to metabolic engineering.

My first exposure to the challenges of scale came during my postdoctoral work at Genentech, where I realized how differently microbes can behave in a big fermenter vs. a bench-scale one when producing recombinant proteins. I spent the next decade working to tackle this problem in an interdisciplinary manner at various companies, eventually landing at DuPont. They were just starting to get heavily involved into industrial biotech, and I had the opportunity to work on projects ranging from biofuels to enzyme production to making omega-3 fatty acids. After leading fermentation work at their site in the US, I then spent years in Asia-Pacific working to scale-up bioprocesses, eventually managing the technology organization in South Asia and ASEAN.

Throughout all of these experiences, I came to fervently believe that the key to scaling up bioprocesses successfully is to approach scale-down work differently.

Using the “scale-down to scale-up” approach requires running a lot more bench-scale fermentations in the short term to ultimately shorten your speed to market by mitigating scale-up risks in the long term.

Ranjan: The biggest challenge with scale-up is the inability to experiment at scale; you get so few “tries” at a manufacturing site because it is time and cost prohibitive. Chemical engineers and bioprocess scientists had historically approached this challenge through matching physical and chemical properties across scales: oxygen transfer, heat transfer, mixing, etc. But this is biology we are dealing with and we need to be considering how physiology, functionality, and phenotype translate as well. In other words, how can you approach both strain engineering and bioprocess development in a way that the engineered phenotype becomes scale independent?

Practically, this means actively investigating how physiological signals in the cell change in response to oscillations in heterogeneity of a production-scale fermenter. High-throughput fermentation then becomes not just about testing many different bioprocesses and conditions in parallel, but unpacking each of those individual bioprocesses further to model how organisms might respond differently to them depending on where they are in a big tank.

I edited a book on this topic based on my years of experience doing this work, with contributions from colleagues who also tackled this challenge in industrial biomanufacturing: Engineering Complex Phenotypes in Industrial Strains.

Culture: Is this a different approach to strain engineering, or to bioprocess development?

Ranjan: It’s both. On the bioprocess development side, you want to model different pockets of your production tank in your bench-scale fermentations. For a given bioprocess this means testing everything from different oxygen concentrations to media concentrations, since these might vary from place to place in a larger tank given the longer mixing times. Understanding how a strain behaves in these different conditions at a small scale allows you to predict how it will perform in a larger reactor by modeling the relative time a microbe might spend in each of the various conditions.

From a strain engineering perspective, you then look to leverage metabolic pathways and phenotypes that preserve function despite these heterogeneities. For example, if there are two glucose transporters in a cell membrane and you knock-out the high-affinity one, you could potentially generate a strain that is less sensitive to changes in glucose concentration. The goal is to engineer organisms that perform the best at scale, keeping in mind that, from the organism’s perspective, their experience in a large-scale tank is not a uniform one. You need to have both a biological and physical approach to the notion of “scaling down.”

Culture: How far can you “scale-down” with this approach to scale-up? In other words, could you take this approach with a microtiter plate assay or microbioreactor?

Ranjan: In my experience, the only way you could use something of that scale is with an extremely well characterized process and a lot of knowledge about the specific production tank you plan to use. Even then, it is still difficult and would require a lot of internal resources and time to build the scale-down model.

For most approaches (especially if you do not know exactly where your industrial-scale production will occur or how your process will work in that specific tank), the smallest scale you can use is 250mL. This scale, with the right instrumentation, is so much more reflective of the oxygen transfer and mixing dynamics in a large stirred-tank reactor. Also, having the proper agitation and understanding of off-gas patterns and carbon balance are essential for building confidence in your scale-up model. If you’re working at 15mL you can only address some aspects and there will never be the confidence level to say, “let’s bypass the 50L and go right up to 10,000L.”

Culture: Have you done that at EVERY?

Ranjan: At EVERY, we have a platform for leveraging bench-scale bioreactors in a model of a 40L pilot-scale tank. From there, we have scaled successfully to thousands of liters. We’re not at the point yet where we leap-frog the 40L, but the goal is to make our model so robust that we eventually can.

Culture: What have been the biggest challenges for EVERY in terms of bioprocess development and scale-up?

Ranjan: We have a lot of in-house expertise and a robust biomanufacturing R&D platform, which has fortunately resulted in fermentation scale-up not being an issue. Our challenge, until we started working with Culture, has been not having enough bioreactor capacity to do the full suite of testing we want to do. Using the “scale-down to scale-up” approach requires running a lot more bench-scale fermentations in the short term to ultimately shorten your speed to market by mitigating scale-up risks in the long term. In addition to testing variants of each bioprocess condition to model production-scale heterogeneities, we also run small-scale fermentations to test different raw materials from different vendors and lot numbers to ensure everything has been evaluated before scaling up.

On top of the baseline throughput needed to use this approach, our strain engineering platform has been incredible at generating new strains to test. We’ve produced so many more microbes than we have the ability to test in-house in bioreactors, which was historically a bottleneck that Culture has since alleviated.

Culture: Obviously I’m thrilled to hear that but, out of curiosity, had you considered expanding your lab in-house with other high-throughput benchtop bioreactor systems?

Ranjan: We did, but fermentation is not just about running a lot of conditions in parallel; it is about understanding and making sense of all that data. Culture offers more than just the high-throughput bioreactor capacity- you also provide the data piece. Being able to access all of our data from all of our runs and to visualize and analyze it on your cloud website is so helpful for us in bridging the gap between engineering and biology.

Additionally, being a small company, our needs and pipeline change dynamically. We were hesitant to invest in equipment for high-throughput capacity that we might not always be using fully. With Culture, we can run high-throughput fermentation experiments with short notice, keeping our pipeline more manageable and overhead lower.

Culture: What’s next for EVERY?

Ranjan: We continue to focus on our goal of replacing animal-derived proteins with sustainable, nature-identical, fermentation-derived proteins. Beyond egg proteins, we are leveraging our synthetic biology and fermentation expertise to make other proteins that cost less and function exactly the same as their animal-derived counterparts. Our work with Culture will help us do this even faster.

We spoke with Farzaneh Rezaei, the Director of Formulation and Fermentation at Pivot Bio, about the challenges of optimizing a bioprocess for their nitrogen-fixing bacteria.

We interviewed Darcy Prather, the co-founder and President of Kalion Inc. Kalion is working to produce high-purity, low cost glucaric acid and glucuronic acid from biomass through a fermentation process.