Pivot Bio is working to replace synthetic nitrogen fertilizer with a cleaner and more sustainable alternative: nitrogen produced by soil microbes. We spoke with Farzaneh Rezaei, PhD, the Director of Formulation and Fermentation at Pivot Bio, about the challenges of optimizing a bioprocess for their nitrogen-fixing bacteria.

Culture: The negative environmental impact of nitrogen fertilizer is well-known in terms of how much energy is required to make it and the harmful effects of its run-off into the water supply. Less well known is how a century of applying synthetic nitrogen to soil has led to bacteria that historically have been nitrogen-fixers losing this ability. Why is this happening? 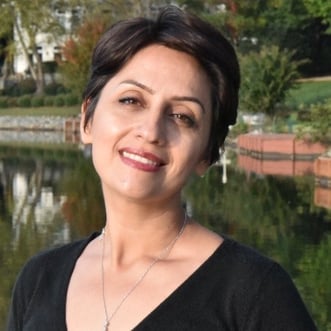 Farzaneh: It is extremely energy intensive and therefore metabolically costly for microbes to fix atmospheric nitrogen into ammonia. A soil environment with abundant fixed nitrogen from application of synthetic fertilizer relieves the selective pressure to maintain the genes that afford this unique ability. Over time, the continuous application of nitrogen fertilizer created an evolutionary pressure for microbes to down regulate or even lose nitrogen-fixing genes.

Culture: Why have the Rhizobia that fix nitrogen for legumes maintained their nitrogen fixing capability better than the bacteria you are studying and working with at Pivot Bio?

Farzaneh: The mechanism through which Rhizobia interact with legumes is very different than the mechanism of bacteria interacting with cereal crops like corn, wheat, and rice. In legumes, there is an endosymbiotic relationship between the plant and the bacteria where the two are interdependent. The microbes are internalized into nodules on the legumes’ roots, which causes a change in their morphology that activates nitrogen fixation. The plants provide them with carbon and energy sources in return. This robust symbiosis conserves nitrogen fixation in Rhizobia because it is essential to their survival.

The bacteria that fix nitrogen for cereal crops live in more of a mutualist way. Scientists call them “free-living” diazotrophs, as they live on the surface of plant roots rather than within plant organs. Nitrogen available to the free-living diazotrophs from applied nitrogen triggers suppression of the genes for nitrogenase biosynthesis. This means that in fertilized fields, microbes can continue to consume the carbon plants provide through root exudates without providing nitrogen in return.

"Benchtop bioreactors help us quickly and easily get the data needed to identify optimal process conditions. Being able to easily set up high-throughput bioreactor experiments with Culture Biosciences enables us to test as many conditions as possible in as short a time as possible, letting us focus on getting a great product to farmers."

Culture: A major challenge in studying microbes is that many species are not culturable in a lab setting. Are the species that Pivot works with the best nitrogen fixers in soil, or just those that can grow commercially?

Farzaneh: At the end of the day we need to work with microbes that we can produce commercially. We are fortunate to have been able to isolate bacteria with a capability to fix nitrogen that we can culture without too many challenges. However, we are always searching for ways to improve how much of the diverse soil microbiome we can access to find microbes that might be better nitrogen fixers or have tighter associations with the cereal crops. It is certainly an area we will continue to explore.

Culture: Once you discovered microbes that you were able to culture, what did you do to reawaken their dormant nitrogen-fixing abilities?

Farzaneh: The bacteria we found had retained the ability to fix nitrogen, but they had evolved mechanisms to inhibit its activation in environments where fixed nitrogen was already abundant. We worked to decouple the regulation of genes responsible for biosynthesis of ammonia from those that sense the level of nitrogen in the environment. The resulting bacteria continuously fix nitrogen whether or not there is an excess of it already in the soil. In addition, we ensure that the nitrogen they produce will be available to the plants instead of being consumed by the bacteria for their own growth.

Culture: How are you affecting these changes?

Farzaneh: We first gather genetic sequence information about the bacteria in various conditions. Through that analysis we make decisions on how to fine-tune the bacterial genome, editing it to optimize their performance as fixed-nitrogen suppliers to cereal crops.

Culture: Once you’ve made these enhancements to the bacterial genome, how do farmers then take advantage of it in their fields? How does your product work?

Farzaneh: Our first commercial product, PROVEN™, was formulated “on-farm.” This means that the farmers received a fully assembled and closed system containing a cap where dry inoculum was added to a pre-formulated growth media. The farmer needed to activate the system 48 hours before they planned to apply it to their crops.

Our farmers loved the benefits of the product and requested that it come in a ready-to-use formulation so that as soon as the weather allows them to plant, they can get it in the ground. It’s one less thing for them to worry about as they allocate their time in response to ever-changing weather conditions during the busy planting season. For 2020, we are removing the activation step and 48-hour wait time so that they can apply the product directly to their fields.

Culture: How does this formulation and application method influence Pivot’s process optimization work?

Farzaneh: It has certainly made process development quite an interesting challenge! While one of the key optimization parameters is the traditional measure of viable biomass, we also need to optimize for stability and functionality of the bacteria in the formulated material.

We have developed assays that enable us to test how the bacteria interact with plant roots and whether they are able to colonize them and provide them with fixed nitrogen. But we also need to ensure that this functionality is preserved not only until formulation, but that it is retained with some shelf-life. On top of that, the functionality also has to be retained after the bacteria are applied to the field.

For the 2019 current formulation, we had to ensure that the bacteria in the lyophilized cap remained viable until activation and that the activated product stayed stable for a minimum of 30 days after activation. With the shift to a ready-made product in 2020, we have developed a formulation where the bacteria are stable in solution from production through shipping and application.

Culture: Will the ready-to-apply product need to be refrigerated?

Farzaneh: No, as you can imagine that would be logistically challenging and cost prohibitive. This adds another formulation and process optimization challenge: keeping the bacteria stable, viable, and functional at ambient temperature.

Culture: While you are optimizing the bacteria to grow in a bioreactor, the product you’re selling is the microbes themselves that will grow in soil on a farm. How do you balance optimal growth conditions for these different environments?

Farzaneh: There are a significant number of unknowns about the soil environments where the product will be applied and how exactly the microbes will behave in those various locations. Given the complexity of optimizing growth, viability, functionality, and stability, our strategy has been to focus on a product with a population of bacteria robust and populous enough to take hold in diverse conditions.

In other words, we try to focus on having enough bacteria at the time of planting that we can guarantee there is a sufficient viable population that can colonize the plant roots. This approach of growing enough to provide the minimum threshold required affects how we optimize our bioprocess and how much of the final product farmers need to apply.

Farzaneh: Our microbes grow directly on the roots of plants and this gives our product an advantage in diverse soil conditions. Soil conditions do indeed vary a lot from place to place, but corn roots in Iowa seem to be similar enough to corn roots in Mississippi to support our microbes. We are working to better understand the performance of our strains in different locations.

Culture: What you’re describing sounds like a really challenging fermentation process to optimize. Are there other challenges you’ve had to face besides those we’ve already discussed?

Farzaneh: We’ve faced a lot of challenges with this unique product, but our team has done an amazing job of coming up with solutions. One challenge has been that the edited microbes grow more slowly than their unedited counterparts because some of the changes we made impact their metabolism. This means we have to think carefully about media choices to provide both high titer and good stability.

Another challenge is that, since we’ve designed the microbes to continuously produce ammonia without breaking it down through nitrogen uptake, they make ammonia even while in storage. For the applied product this is great because the plant will take the nitrogen up, but it has been a really fun challenge for the formulation team to figure out how to stabilize these bacteria at a high cell density during storage.

Culture: What role do benchtop bioreactors play in all of these process optimization challenges?

Farzaneh: We are working as quickly as possible to improve our bioprocess and get this powerful tool to farmers as fast as we can.

Tackling all of the process development challenges I mentioned requires fine-tuning many parameters. Benchtop bioreactors help us quickly and easily get the data needed to identify optimal process conditions. Being able to easily set up high-throughput bioreactor experiments with Culture Biosciences enables us to test as many conditions as possible in as short a time as possible, letting us focus on getting a great product to farmers.

When we first started working with Culture, we scaled-down processes we had been doing at 10L or 15L into 250mL vessels, and then after optimizing them we scaled them back up to larger tanks. Moving forward, as we develop new products, we’ll start process development in Culture’s bioreactors, knowing that what we develop will easily scale to production conditions.

An Interview with Michelle Zhu & Tammy Hsu of Tinctorium

For our first Customer Spotlight interview, we spoke with the Co-Founder and CEO of Geltor, Alex Lorestani.