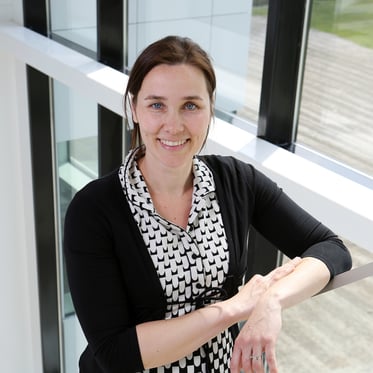 Culture: Thanks so much for agreeing to speak with us, Kirsten. I understand that your background is in environmental science and technology. How did that lead you to become an expert in fermentation process development?

Kirsten: As an environmental engineer, you know as no other that a new sustainable technology not only needs to be robust and reliable, but it has to be price competitive with the state of the art. My work in fermentation began with designing a process to recycle waste streams by using them as input feeds for bioprocessing. Instead of breaking down the waste into methane gas, we were looking to use an anaerobic digestion pathway that would convert it to volatile fatty acids, and then we would use those fatty acids as an input carbon source for higher value chemicals.

When working on this production process, I always kept in mind the need to ensure it was economically viable. If we really wanted to create an environmentally sustainable solution where waste products would be reused, it had to be attractive from a revenue perspective. Dealing with waste, the process required a continuous mode of operation 24/7. This necessitated that we develop a stable continuous conversion and a cost-effective means of product removal.

Culture: From there you went on to be the CEO of Waste2Chemical, which is now called Chaincraft, which also focuses on recycling wastes into industrial chemicals. Why are these renewable processes not more prevalent? What is holding us back from a renewable carbon economy vs. creating these products in a linear economy with petrochemicals?

Kirsten: These processes have been known since the 1970s and 1980s but making them cost effective has been the greatest barrier to their widespread implementation. One of the biggest challenges in using waste as a carbon source is the logistical and regulatory infrastructure required. Europe has implemented more strict legislation about separation of wastes, which made it possible for us to source waste from there. Canada seems to be following suit, particularly with more regular use of composting.

Now is the moment for recycling and renewable resources. It is becoming more broadly accepted that we cannot continue to do what we’re doing now because it isn’t sustainable and resources are becoming limited. I’m very excited about what’s going on; when I started my PhD people said, “everything is going to be bioethanol in five years,” but it didn’t really happen. But I think it’s happening now.

Culture: Even if we figure out how to generate cost-effective renewable carbon sources, what other challenges still stand in the way of making large-scale fermentations more economical?

Kirsten: People are often so focused on generating higher yields of their product that they forget about the costs associated with isolating it from the fermentation broth. They look at titer and think, “Oh wow, 10g/L is awesome,” without realizing that they have 990 kg of water in their 1000L tank and they still have to isolate the 1% that is product. From a scientific point of view, it is very difficult and therefore very expensive to separate products from water.

Culture: How should people be approaching optimizing their fermentation process efficiency instead?

Kirsten: I always encourage people to focus on developing strains and processes optimized for productivity: getting as much product as possible within a given time frame. Most fermentation products are toxic or inhibiting to the producing strain, even at low concentrations. As a result, these products are usually produced either in lots of small batches or in very large batches. In either case, it is very inefficient from a cost perspective given the time, space, and resources involved in generating products at such low concentrations.

But if you instead focus on productivity, you can then implement continuous product removal. If the toxic product is removed as the microbes produce it then you can run the process longer since the product isn’t building up and killing the cells. This leads to processes ultimately being more productive than when trying to get the highest yield at the end of a batch fermentation.

Kirsten: Legacy approaches use membranes, but these can be very challenging. They’re hard to scale and you get clogging, high pressure gradients on different sides of the membrane, and they use a lot of energy which can be costly at scale.

At DAB, we’ve invented a new method of continuous product removal that uses solvent overlays. This method not only enables processes to run longer, but it also reduces downstream processing steps since the product is isolated in a chemical solvent and not the fermentation broth.

Culture: What types of companies should be looking at continuous product removal to improve their process efficiency?

Kirsten: Any company where production costs are a barrier to the economic viability of the product should consider it. If you’re making something that is very high-value you might be okay using batch fermentation. Companies looking to improve their techno-economic model of a lower value product tend to look towards increasing the yield per batch, reducing the operational costs of a batch, and/or by using a smaller site or smaller volume reactors.

Our continuous product removal technology enables all of these: removal of the inhibiting product increases yields while decreasing downstream processing costs. Given the emphasis on continuous productivity and continuous removal, the process can also be run in smaller reactors at a smaller site, increasing savings.

Culture: If a company is going to use continuous product removal during their fermentation, how would this influence their overall R&D process?

Kirsten: As I always encourage, this shift should lead to a prioritization of productivity over titer. I try to challenge strain developers to think with this mindset, getting a process to run longer rather than peak sooner. Strain screening should then be done in scaled-down bioreactor models where you can measure product over time in production conditions and see where the slope is highest. You would then do your process development work similarly aiming to maintain high productivity, and then finally test this with different solvent overlays to see which work best.

Culture: What advice would you share with synthetic biology companies that are just starting out in this space?

Hire a good process engineer early, because the logistics and financials of your production process will make or break you. Always “begin with the end in mind,” think about the end production from day 1 when you first start strain engineering.

Anaerobic Fermentation: A Breath of Fresh Air for Synthetic Biology?

Tell us more about how we can help, and we'll reach out
and provide more information.