Anaerobic Fermentation: A Breath of Fresh Air for Synthetic Biology?

We spoke with Hugo Cueto-Rojas, Ph.D., a fermentation expert who has worked on both industrial biochemical manufacturing at Invista and upstream bioprocessing for biopharmaceuticals at Janssen. In a paper he worked on as a student at Delft University of Technology, Hugo demonstrated that many fermentation processes that are done aerobically today could in fact be done more efficiently (and therefore cost-effectively) if done anaerobically.

Hugo: It all goes back to the often-stated first-rule of biomanufacturing: “design with the end in mind.” Designing a fermentation process that is economically viable requires that you do the techno-economic modeling before you dive in and start with strain engineering. You need to consider the market value for the end-product, and then understand how that price point will dictate what will and won’t be feasible from a bioprocess perspective.

In a benchtop bioreactor the cost of electricity for stirring and heating or cooling is negligible, but when producing at scale it can be the difference between making a profitable product or not. Aerobic fermentation requires a lot of oxygen and generates a lot of heat, meaning you need a lot of power input to transfer oxygen to the broth and to cool it. When doing aerobic fermentation you also generate a lot more biomass and convert a lot of your carbon source to CO2, both of which are inefficient uses of energy.

Hugo: The development of industrial fermentation science was driven by aerobic production of citric acid, lysine, glutamic acid, and penicillin because they were the money makers. With cheap carbon sources and abundant oil for energy, there wasn’t a need to make these processes optimally efficient because they were still profitable. The Germans were doing industrial anaerobic fermentation to make acetone and butanol during WWII when the British cut off their petroleum supply, but this was mostly forgotten when the war ended and oil was cheap again.

Culture: In your paper you devised a system for measuring whether a given fermentation process would be feasible anaerobically, presumably with the goal of convincing more people to go this route. How did you come up with this system?

Hugo: Biological systems are machines, and they follow the laws of thermodynamics. Energy comes into the system and is used for metabolism, converted to motion, or released as heat. As long as there is enough free energy in a system, life can thrive. So, I decided to think about leveraging existing principles and equations about measuring free energy and applying them to a biological system.

When you look up the standard Gibbs free energy of formation values for different substances, they are calculated based on (1) the reaction happening under standard conditions (25 deg C and 100kpa) and (2) the molecule being formed from its constituent elements in their standard states. But life rarely uses elements, it uses compounds: N2 isn’t the source of nitrogen for most living things it is NH4, and sulfur comes from SO4 and not S2. Additionally, biological systems rarely form molecules directly but rather through lots of smaller steps.

Culture: So if I calculate the value for a given anaerobic substrate to product conversion at a certain temperature, pH, pressure, etc. and it is negative, then it should be feasible to biomanufacture that product anaerobically?

Hugo. That’s a critical first step, but it isn’t the whole picture when considering feasibility. Under anaerobic conditions, the reduction of the substrate into the product is also the process which provides energy for the microbes. The process of making the product therefore needs to release sufficient energy for cellular maintenance, biomass production, and excretion of the product.

Culture: Whereas with aerobic fermentation, oxygen is the reducing agent and the product is something else?

Hugo: Right. In aerobic fermentation the microbes convert a carbon source into energy via catabolism, and then produce your desired product via anabolism. In other words, they first convert sugar into energy (by reducing oxygen through the electron transport chain and generating ATP), and then expend some of that energy to build a compound that you’ve designed them to make.

In such a process, the product isn’t essential to the microbe. In fact, it’s usually an afterthought. This necessarily means that the fermentation process to make that product is going to be inefficient. The cells are consuming the carbon source, generating energy which is used for maintenance of the cells and is converted to biomass as they grow and divide. Some of that energy is also used to synthesize your product, usually through an energy-intensive pathway.

So, to answer your initial question, you have to ensure that the free energy doesn’t just indicate that an equation is possible, but that it is also sufficient to power the cells. There are known constants for various microbes for these energy requirements. Finally, there needs to be enough energy left to excrete your product because while it is valuable to you, it is a waste product to the microbes who have little use for it once it has been reduced.

Culture: If you’re looking to be optimally efficient, then would you want the free energy delta to be as close to the required amount as possible after factoring in those other requirements?

Hugo: Exactly-- in an ideal system all of the ATP generated would be used for maintenance and not biomass. From an industrial perspective, less biomass is a good thing because it ends up being thrown away and is a waste of energy and resources.

In an anaerobic fermentation where you are converting substrate to product, it is much simpler to have an efficient system than in aerobic fermentation where you need to generate energy to make the product. I’ve seen brilliant scientists engineer pathways into organisms that require huge amounts of ATP and therefore large amounts of energy-rich substrate that would never be viable at scale. Strain engineering can make cells more efficient producers to an extent, but this has its limitations.

Culture:  Let’s work this all into an example. My friend tells me that there is currently a shortage of eucalyptol in the flavorings and fragrances industry. I believe today it is typically produced by distilling oils from plants like eucalyptus trees, among others. Now I want to make this product biosynthetically. Walk me through what we’d need to consider.

Hugo: I admittedly don’t know much about eucalyptus, but let’s go through the steps. First, you’d want to consider the energy feasibility we’ve been discussing. But before you jump to looking up free energies, just think about it holistically.

Presumably eucalyptus trees produce this oil for some non-essential purpose: signaling, defense, etc. It is likely an energy intensive process with many precursors, and the plants use energy they’ve derived from photosynthesis to carry out these anabolic reactions. If you identify all of the enzymes in this pathway and clone them into some microbe, it will of course be an aerobic process that will need to consume a lot of energy to fuel. Odds are, it will be cheaper to harvest plants and get the oil that way.

To do it more efficiently with anaerobic fermentation, you’d need to find or design some microbe that produces eucalyptol as a waste product by using some precursor as a reducing agent. This is where real synthetic biology comes in to play.

Culture: What do you mean by “real” synthetic biology?

Hugo: So many of the products we would want to make, like eucalyptol, aren’t naturally the products of catabolism. The common approach today to solving this is to rely on more muscles than brains. We have the technology to do massive genome sequencing, so people boil the ocean to try to find something that might work. But that isn’t really synthetic biology, it is metabolic engineering.

Truly synthetic biology would be devising a new system- likely through collaboration with organic chemists, structural biologists, etc. to design de novo a new pathway- that generates energy for a cell by producing the desired product (in this case eucalyptol) as a waste product.

Hugo: It’s definitely a step in the right direction, I think. At least there you are taking different elements from nature and combining them to create something new. I’d love to see more people engineer new functions not found in nature.

Culture: Okay, so let’s assume we were able to devise this process and find a substrate to eucalyptol-product that generated some free energy. Now I need to assess whether that free energy is sufficient for maintenance of my microbe. But how do I pick a host?

Hugo: It depends a lot on the specifics of the process, but there are some good resources to guide this decision. For example, yeasts are suited for a lower pH whereas bacteria are generally not happy in a more acidic environment. However yeasts are pretty horrible at excreting things like amino acids because they’re hard wired to capture them and not excrete them.

Culture: Then I have to worry about the energy required for transport?

Hugo: Exactly, you have to think about how you’re going to get the eucalyptol out of the cell. I can’t tell you how many times I’ve seen people design a clever pathway and forget about this step. Can you leverage existing transport mechanisms? Can you engineer a pore or some new transport that will do it by diffusion with low energy consumption? This can be a real challenge.

Culture: Alright, so now I’ve calculated the energy required and know the temperature and pH I’ll need to maintain, as well as the substrate inputs into my fermentation.

Hugo: Then it’s basic financial modeling- how much will it cost you to produce a given quantity of product at scale under those conditions? If it’s less than the price people will pay for it, you’ve got yourself a valuable biomanufacturing process.

Culture: That was really helpful for me to get a grasp on everything, thank you. You wrote this paper back in 2015, have you noticed any shifts in the industry since then?

Hugo: There are some people working on producing glutamic acid and lysine anaerobically, and I think that will really disrupt the amino acid market. Unfortunately people tend to stick to the pathways we all know, and it’s mostly an aerobic fermentation world today. Hopefully a breakthrough will start a trend in the direction towards doing more anaerobic fermentation, driving forward new applications for synthetic biology. 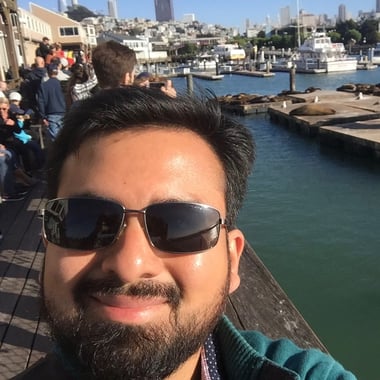 Hugo on his first visit to San Francisco after stopping by for a tour of Culture Bioscience's Lab.

Tell us more about how we can help, and we'll reach out
and provide more information.